‘I was so shocked when I saw it, it made me stop in my tracks,’ says Sophie Walker.

A woman has criticised Waitrose for stocking a magazine with a cover that reads: “Reversing autism – reigniting your child’s brain”.

Sophie Walker from London, was shopping in her local Waitrose supermarket, when she came across the “Get Well” magazine cover on the newsstand.

Walker, who has a 17-year-old daughter, Grace, with an autism diagnosis, told The Independent: “I was so shocked when I saw it, it made me stop in my tracks.”

She took a photograph of the magazine and shared it on Twitter, with the caption: “What is this absolute crap on the shelves of my local Waitrose? Have you any idea how offensive this is?

“My daughter is well. Her brain is fully ignited – and firing such that she creates and thinks in ways that inspire and astound me daily. Scrap this ableist shit now.” 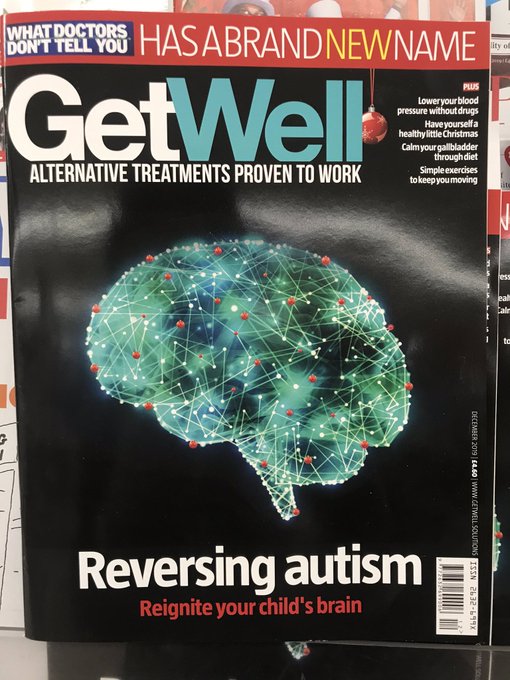 Autism is a condition that affects social interaction, communication, interests and behaviour, says the NHS. On their website it says: “Being autistic does not mean you have an illness or disease. It means your brain works in a different way from other people.”

In the 24 hours since she shared the tweet she has had hundreds of supportive responses from people in the autism community.

One mother said: “Oh. My. Days. As a mother of a daughter who has autism I am appalled. Wow speechless Waitrose please please take this off your shelves.”

Walker explains: “The idea that people with autism are failing, that they need to be cured because they’re unwell, it is so manipulative.

“I particularly worry about the parent of a child who might have a recent diagnosis, or be waiting for one. In that time there is a lot of uncertainty and parents need support, love and kindness not to have autism framed as something that needs fixing.”

Walker’s daughter Grace, who was not shopping with her mum at the time, also shared a statement with The Independent, saying: “Instead of complaining about autism, we should consider what it must be like for the child in question, who’s actually got it.

“What does that child need? How can they be supported and appreciated as they are?

“Parents with autistic children can have a difficult time of it. But trying to change who your child is not at all the solution to dealing with them, whatever that involves.”

Grace said that autism is not a “defect or mental illness” and instead should be seen as a “different operating system”.

She cites famous people with autism including climate activist Greta Thunberg, who has Asperger syndrome (a form of autism), as proof that autism is not a barrier to success.

Walker has not received a response from Waitrose since her tweet.

A Waitrose & Partners spokesperson told The Independent: “We do not usually take a view on the editorial content of the many hundreds of magazines we sell.

“However we are very sorry this has upset some customers and we will be raising these concerns with our supplier.”

The Mandatory Training Group is the leading UK provider of accredited healthcare and social care statutory and mandatory training courses, programs and qualifications

Click on the links below to find out more about our autism awareness training courses and programs.

New evidence on alcohol-related harm to people other than the drinker. The nature of the problem We all know about the... read more

NHS ‘should not pay’ US surrogacy costs after cancer misdiagnosis

NHS 'should not pay' US surrogacy costs after cancer misdiagnosis. GETTY IMAGES The woman, now 36, was left infertile at the... read more

Alarm at under-reporting of serious incidents at two mental health units. The Tyrone and Fermanagh Hospital The Grangewood unit in Londonberry A... read more

Half of key doctors not ready for another Grenfell or Manchester Arena bombing -survey. All hospitals are required to have... read more

Grenfell Tower Inquiry: Next phase of hearings delayed. Hearings looking at the decisions leading to the fire have been pushed... read more

Tafida Raqeeb: Brain-damaged girl who was flown to Italy for treatment is ‘settling in well’

Tafida Raqeeb: Brain-damaged girl who was flown to Italy for treatment is 'settling in well' The five-year-old and her family... read more